Deep learning is one of the methods by which we can overcome the challenges of feature extraction. These models are capable to focus on the right features by themselves, which requires very little guidance from the programmer. These models also partially solve the dimensionality problem. Whenever there is high dimensionality data it has a lot of features and a lot of predictor variables, we use this concept. Deep learning extract features on its own and understand which features are important in predicting your output.

What is Deep Learning?

How does Deep Learning work?

People started coming up with deep learning, their main aim was to re-engineer the human brain. This is basically inspired from our brain structure. It studies the basic unit of a brain called the brain cell or a neuron. These neurons are replicated in DL as artificial neurons, which are also called perceptron’s. 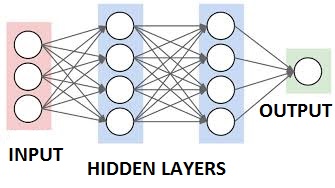 It is also using in automatic machine translation. In this we can convert English language into Spanish and Spanish to Hindi. We can convert one language to another language by using deep learning concept.